Giuseppe & Albano Buracci has been producing ropes and strings since 1930.
Ever since 1960 synthetic fibres have gradually replaced vegetal fibres that's is why the present produce is totally
systhetic. Buracci's ropes and strings are highly tehcnologized and so particulary appreciated and used for agriculture,
fishing and industry. 95% of their invoiced is bound for exportation and recent surveys have pointed out that 10% of
italian ropes exportation is made by Giuseppe & Albano Buracci s.n.c. 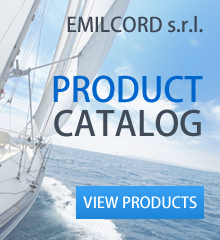